I was a student at the University of Oradea, Computer Science department between 2007-2011. This was my second university degree. I spent almost all my free time studying besides work and family. I made less astronomical observations but it was my decision.

The last year we had to select theme of thesis. As we got a free hand in this regard I could choose what I wanted to do (of course, with the approval of tutor teacher). I decided to implement n astronomy software.

I tried to satisfy one of my old desire: an application that facilitates the (visual) observation of variable stars.

Back when the AAVSO charts could not be generated at will, it happened that some stars had only one chart (e.g. d scale chart) on which there weren’t any stars could be seen with naked eye. In that case a star chart had to be taken and find the sky area corresponding using the variable star coordinates. Afterwards the observations could be made.

So I wanted to make an application which is able to generate a finder chart for a given variable star (like a planetarium software) and is able to show the observing chart with comparision stars (e.g. AAVSO-chart -- just like an image viewer software), allows the result recording of observations and finally allows to generate reports.

The following input data are required:

- the geographical coordinates of observer’s location

In the first step the program reads the data from the variable star catalog (GCVS) for each variables included in the list identifying by their names. Then it determines which variables can be seen ( above the horizon actually) by using the geographical coordinates, date and time. These variable stars are sorted by a given criterion, and this list will be displayed on the screen. The observer selects a star from the list and the corresponding finder chart and / or observing chart will be displayed.

The finder chart is generated at first and then it is plotted on screen. To do this, the Tycho catalog and the Yale Bright Star catalog are used – for representing the stars the former, the latter for writing the Bayer and Flamsteed designation of star. The finder chart’s field of view can be modified. The orientation can have two mode/ types: the top of the chart pointing north or towards the zenith. We can choose between four projection modes: stereographic, orthographic, gnomonic and equidistant.

The observation chart is displayed. This requires that the observer must have this chart of that variable previously downloaded and correctly named.

IT Characteristics Of Pleione 4.0

The software’s block diagram is shown below: 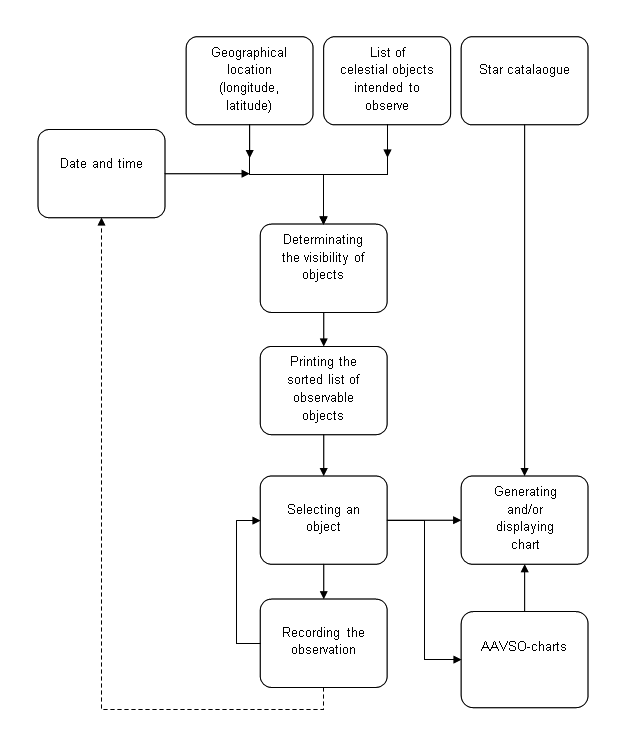 If you haven't used Pleione before

I encourage everyone to use the application.